by Victor Amadu
in Breaking, Crime
0

Disgraced super cop, DCP Abba Kyari, has on Monday, been arrested by the Nigerian Police Force (NPF) following a ‘WANTED’ tag placed on him by the NDLEA. ayokinews.com reports

Kyari was apprehended shortly after the National Drugs Law Enforcement Agency (NDLEA), issued a warrant for his arrest due to his alleged ties to an international drug cartel.

EFCC: How Ogun Speaker, Oluomo forged docs to embezzle over N5bn [ALL CHARGES]

At a press conference on Monday, NDLEA’s spokesperson, Femi Babafemi, revealed that Kyari is a member of an international drug cartel operating on the Brazil-Ethiopia-Nigeria illicit drug route.

Recall that Abba Kyari was suspended due to his alleged participation with Ramon Abass also known as ‘Ray Hushpuppi’, an international cyber fraudster.

Kyari was accused by the FBI of profiting from a fraud carried out by Hushpuppi and his cyber syndicate.

Abba Kyari was apprehended just hours after the NDLEA declared him wanted and issued a warrant for his arrest over alleged drug connections. 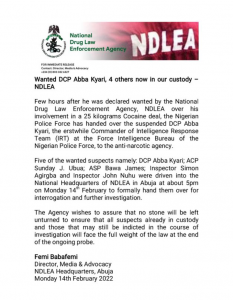 Abba Kyari: Why Buhari Should Be Commended – Adeyanju

EFCC: How Ogun Speaker, Oluomo forged docs to embezzle over N5bn [ALL CHARGES]

Abba Kyari: Why Buhari Should Be Commended - Adeyanju