The suspension of the result collation was announced on Sunday, by the INEC Returning Officer for the election, Professor Florence Obi.

According to Mrs. Florence, the decision to suspend the election result collation was necessary so as to give room for a supplementary election in Ihiala LGA, which has been fixed for November 9, 2021.

It should be recalled that the INEC Collation Officer for Ihiala, Ahmadu Umar, had earlier said that there was no electric conduct in the LGA. 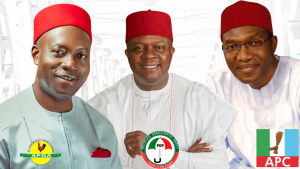 Citing relevant sections of electoral law in the Nigerian constitution, the returning officer stated that the final collation of results by INEC, cannot be done until the polling units in Ihiala LGA are covered.

Tinubu: I would’ve been in Aba chasing lizards as native doctor if not for Lagos – Joe Igbokwe