by Victor Amadu
in Security, Terrorism
0

In a letter addressed to President Muhammadu Buhari, Governor Bello Matawalle of Zamfara, and the Emir of Shinkafi, the banditry kingpin clearly outlined his requests.

On Sunday, December 19, 2021, Bulama Burkarti, a well-known Journalist, released the contents of the letter via his verified Twitter handle. 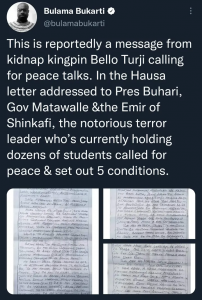 The letter which was written in Hausa language, lays forth (5) five essential requirements for peace between Nigeria and the bandits. The stated conditions are:

1. In the North-West, Bello Turji called for the disbandment of vigilante groups, arguing that ordinary citizens should not be allowed to kill Fulanis in the name of combating insecurity.

2. He stated that armed bandits are willing to lay down their weapons if a meeting can be convened between them (bandits), politicians, emirs, and religious leaders to air their grievances and find a solution.

3. He went on to say that the marginalization of Fulanis in Nigeria should end, claiming that they became extremely violent as a result of bigotry and discrimination against them.

4. Turji further urged traditional rulers and politicians to stop deceiving them and breaking promises, saying that if they did the necessary, terrorists would not break their part of the bargain.

5. Finally, the terror kingpin stated that first-class traditional monarchs and religious leaders must be present at the peace meeting.

Sheikh Ahmed Gumi, he claims, must be included in the peace dialogue because he had already met with them and appealed to them. He stated that if this occurred, peace would be possible in the country.