by Victor Amadu
in Politics, Sponsored
0 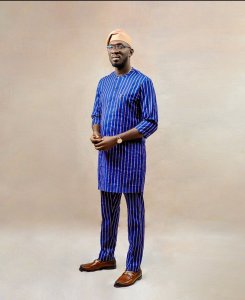 For so long the people of Ikeja 1 constituency, Lagos state, have clamored for a people-oriented leader to represent their cause at the state house of assembly. The search for a good and sound representative is not yet out of the box as the 2023 general election approaches.

Taking up the challenge and ready to wear the responsibility of the people, is a Nigerian Lawyer and entrepreneur, Oyebiyi Ladapo, who does not only have the intelligence but also has the capacity to deliver the mandate to the people of Ikeja 1 constituency.

Oyebiyi Ladapo was born on April 14, 1985 at Liverpool Women’s Hospital United Kingdom, to the great family of Ladapo and Alakija family of Lagos state. He had his education at the prestigious International School of Lagos and Kings College, Lagos state, for his secondary education.

Ladapo proceeded to the Lagos State University, Ojo, where he obtained his Bachelor’s Degree in Law, then furthered to the Nigerian Law School, Abuja, which enabled his official ‘Call to Bar’. Upon his call to the Nigerian Bar, Ladapo served as a registered member of the Nigerian Supreme Court for fourteen (13) years.

In his curiosity and knowledge-seeking behavior, he furthered his educational quest at the Edinburgh Business School, and also Herriot Watt University, Scotland, for a master’s in business administration.

Oyebiyi Ladapo is the founder of a tech-driven paperless law firm named ‘The BL Practice’ and also sits on the board of a few Nigerian startups and small businesses as a directions consultant.

Volunteered for blindness prevention program, in Lagos state ministry of health project from the year 2000, He’s also a volunteer member of illegal aid Nigeria and he also volunteered for kick polio out of Africa.

Starting his career in politics, Oyebiyi Ladapo served as a SA of Transportation to the SA / acting Hon. Commissioner of Transportation to the Lagos state government under the regime of former Governor Akinwunmi Ambode. He is also a consultancy expert with vast experience consulting largely in the public sector, comprising of the state and national level.

Oyebiyi Ladapo is a modern-day politician with traditional approach to issues bothering his society. He is mostly admired for his confrontational but conservative political ideologies.

Oyebiyi Ladapo is a strong and vocal advocate for the inclusion of women in governance. He also has a high focus on education, healthcare, and sustainable development goals.

In his opinion, governance should be women DRIVEN because women are naturally / divinely progressive. He believes in the collaboration of both genders (male & female) in proffering solutions to most of the recurring socio-economic issues being faced in society.

Oyebiyi is a social technocrat and a professional per excellence.

Oyebiyi Ladapo is a member of the ruling All Progressive Congress (APC), and is currently contesting to represent his loving people of Ikeja 1 Constituency, in the Lagos State House of Assembly in 2023.

Following his declaration to contest in the 2023 election, Oyebiyi has promised to bring robust development through his massive influence to the people of the Ikeja 1 Constituency. He has also promised to utilize his vast experience to better the total welfare of his constituents.

Deborah Samuel: Suspect in viral video is from Niger Republic; we can’t find him in Sokoto – Police