The NDLEA on Wednesday, posted a mugshot of the social media celebrity, with captions showing his indictment of being in possession of Cannabis and Tramadol.

Reacting to the development, N6 took to his official Instagram handle to throw a shade at the arrested skit maker saying, “Skit maker by day. Drug dealer by night. Now that’s some Gangster Shit.” 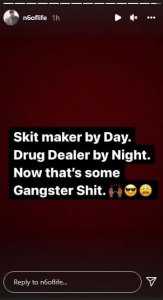 Alex Rodriguez Opens Up On Breakup With Jennifer Lopez

2023: We must confront oppressors, fight for our freedom – Charly Boy