by Victor Amadu
in Sport
0

After Nigeria’s 1-0 triumph over Egypt on Tuesday evening, Kelechi Iheanacho dominated the headlines ahead of his Premier League opponent Mohamed Salah. ayokinews.com reports

The match, which took place at the Stade Roumdé Adjia in the Cameroonian town of Garoua, was their first in Group D of the postponed 2021 Africa Cup of Nations (AFCON).

The Super Eagles, led by technical director Austin Eguaveon, put in a strong performance against the Pharaohs, kicking off their bid for a fourth continental crown on a high note. 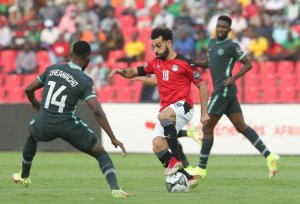 The game was dominated by Nigeria throughout and shortly after the half-hour mark, Super Eagles Iheanacho snatched a fantastic pass in the area and shot into the top corner.

Kelechi Iheanacho’s well-placed volley gave the Super Eagles a 1-0 lead over Egypt in the African Cup of Nations match.

AFCON 2021 Will Be My Last For Nigeria – Ahmed Musa

Since the start of the continental tournament in 1990, the Eagles have won four times against Egypt in nine games. Today’s triumph was their first since 1990.

The last time the Pharaohs lost in the group stage was in the 2004 edition, when they lost 2-1 to Algeria.

Earlier in the day, in Group E, defending champions Algeria were held to a dismal goalless draw by Sierra Leone.

On Saturday, January 15, the Super Eagles will face Sudan, while Egypt will face Guinea-Bissau on the same day.

FIFA Speaks On Changes Ahead Of 2022 World Cup

Ghana rescued by VAR in goalless draw against Nigeria