Following the military invasion of Ukraine, eight Russian commanders have been sacked, over huge casualties on the battlefield, according to Oleksiy Danilov, the director of Ukraine’s security council. ayokinews.com reports

Another report also claimed that Russian President Vladimir Putin, is displeased with FSB security service chiefs for providing him with intelligence stating that Ukraine was weak, infested with neo-Nazis, and would readily surrender if invaded.

Putin is clearly very unhappy, according to Philip Ingram, a former senior British intelligence officer, who told The Times that he is blaming his intelligence institutions.

“He blames them for seeding him the advice that led to the poor decision-making in Ukraine,” Philip said.

The poor intelligence advice caused Russia’s military to invade Ukraine less than ideally, resulting in many more losses than intended in a battle that has lasted more than two weeks.

According to Danilov, Putin believed Kyiv, Ukraine’s capital, would fall in two to three days, therefore he dispatched small forces to take important objectives in the early days.

“It hasn’t happened and never will,’ he said.
Danilov said ‘desperate’ Moscow has ‘now switched to a different tactic” by changing leadership.

“They had about 8 generals removed from their posts because they did not complete the task,” he told state TV.

Another information, according to the report, is that the FSB gathered valuable intelligence but was reluctant to tell Putin the truth, so they doctored their reports to satisfy him.

“The problem is that it is too risky for superiors to tell Putin what he doesn’t want to hear, so they tailor their information,” he said.

As conflict continues and punishing sanctions isolate the country, they are claimed to be making ‘apocalyptic’ predictions about the coming weeks and months.

When asked how Russian politicians and oligarchs were reacting to the crisis, one source told Rustamova that: “They’re carefully enunciating the word clusterf**k.”

“No one is rejoicing. Many understand that this is a mistake, but in the course of doing their duty they come up with explanations in order to somehow come to terms with it.”

Over two million Ukrainian refugees have fled since Russia invaded Ukraine on February 24, citing food, water, heat, and medical shortages, with some resorting to melting snow for water. 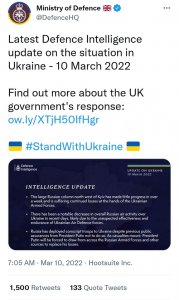