by Victor Amadu
in Court
0

Former Accountant-General of the Nigerian Federation, Mr. Ahmed Idris was on Friday, remanded in prison by a Federal High Court sitting in Maitama, Abuja.

The Economic and Financial Crimes Commission (EFCC) is accusing Mr. Idris of illegally diverting around N109.4 billion worth of public funds without authorization.

The ex-AGF was charged with 14 counts charges bothering on conspiracy, criminal breach of trust, and money laundering at his arraignment. 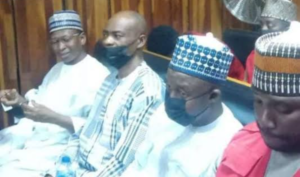 Justice A.O. Adeyemi Ajayi, the presiding judge, issued the remand order, stating that he was to remain in custody until his bail application was reviewed on Wednesday of the following week.

Mr. Idris and his co-defendants had earlier entered a not guilty plea to the allegations filed against them by the EFCC.

The other defendants in the case are, Gezawa Commodity Market and Exchange Limited, Godfrey Olusegun Akindele, and Mohammed Kudu Usman.

Check Also: Editorial: The dynamics of the fight against fraud and bribery

Kizz Daniel’s ‘Buga’ is the most googled song in Nigeria

Every Nigerian is a shareholder in NNPC Limited – FG

Every Nigerian is a shareholder in NNPC Limited – FG