by Victor Amadu
in Sport
0 More than 500 retired world champions competed in the US Open judo competition. 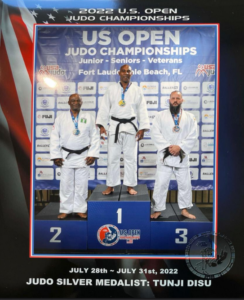 In 1986, Disu became a judoka. He won two gold medals at the national sports festival in Bauchi four years later.

He has to his credit, two gold medals in the Nigerian police games and one silver medal at the military games. At the inaugural veteran championships held by the Nigerian police in November 2021, Disu took home the gold medal.