by Victor Amadu
in Security
0

Nigerian President Muhammadu Buhari, on Wednesday, paid a visit to the Kuje Custodial Centre, which was attacked by Boko Haram terrorists on Tuesday night. 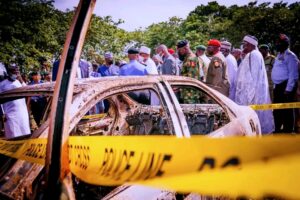 Boko Haram terrorists had on Tuesday night, stormed and attacked the prison facility, opening fire and setting off explosives.

About 600 prisoners are believed to have fled the prison, although 300 have reportedly been found, the Ministry of Interior said. 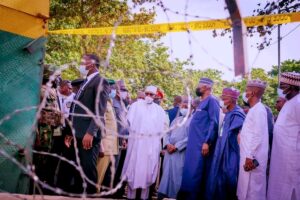 The president visited the attacked Kuje Custodial Centre along with several officials and Senior Security Chiefs.

Check Also: Effects And Causes Of Prison Break In Nigeria: A Case Study Of Selected Correctional Centers In Nigeria