by Victor Amadu
in International News
0

Prior to this, Johnson had rejected calls from his Cabinet to resign in the aftermath of his ethic scandals.

He finally gave in to the resignation calls after more than 40 ministers resigned from office, telling him to do same.

Boris Johnson, announced his retirement on Thursday, in a speech made outside No. 10 Downing Street, stating that it was obvious the Conservative Party needed a new leader.

“The timetable will be announced next week. I will serve until there is a new leader in place,” he said.

“The reason I have fought so hard is because I felt it was my duty. I am immensely proud of my achievements. We will continue to back Ukraine.

“The economic scene is difficult.

“It is painful not to see my term through.” 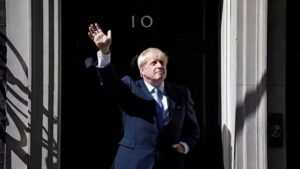 However, it is not yet clear whether Johnson will stay in office while the Conservative Party chooses a new leader who would replace him as British prime minister.

War: Your new defense assistance is bringing victory against Russia – Zelensky thanks Biden