by Victor Amadu
in Crime, News
0

Deborah was killed on Thursday morning, for reportedly making anti-Muslim remarks on a school WhatsApp group.

Following the incident, Atiku resorted to social media to condemn and seek justice for Deborah.

“There can not be a justification for such gruesome murder. Deborah Yakubu was murdered, and all those behind her death must be brought to justice. My condolences to her family and friends,” Atiku wrote on Facebook and Twitter.

However, Atiku’s comments were deleted after religious fanatics threatened his 2023 presidential bid.

Read Also: Atiku: How Nigeria Is Failing Its Youths

A large number of the comments on the Facebook post, stated that Atiku had lost the 2023 election due to the condemnation of Deborah’s murder. 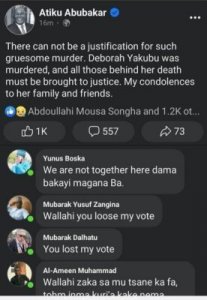 However, less than an hour after it was published, the post was deleted.

2023: “I’m back actively” – Tinubu breaks silence after return to Nigeria